Tax Changes on the Horizon? 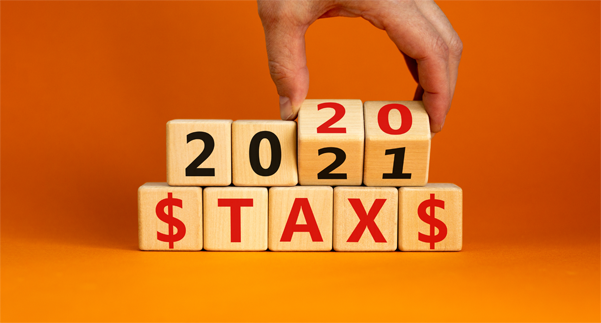 Wednesday evening marked President Biden’s first address to a joint session of Congress. Most of his remarks were focused on the pandemic, the resulting global crisis, and his plans for further actions to provide aid and stimulus. Notably, however, he also formally began the discussion on proposed changes to tax laws, which could have a significant impact on personal income taxes, capital gains, and estate taxes. A brief recap of the highlights of proposals from President Biden and others include alterations to:
Taxes on Current Income and Gains
Top marginal tax rate: For those with income greater than $400,000, the top tax rate would increase from the current 37% to 39.6%.
Capital gains: The tax rate on capital gains and dividends would go up from 20% to 39.6% for households making more than $1.0MM, a substantial jump.
Carried interest: Carried interest, or the income flowing to the partners of private investment funds, including hedge and private equity funds, would be treated for tax purposes as ordinary income. At present, carried interest is taxed at (usually lower) capital gains rates.
Estate Taxes
Step-up in basis: Currently, if you inherit an asset that has increased in value during the time the owner held it, its cost basis increases or is “stepped up” to its fair market value at the time of the benefactor’s death. If the new owner sells the asset, capital gains are calculated on a change in value in the time between the date of death and the time of sale. Under the new proposed laws, the step-up would be repealed, and capital gains taxes would be incurred based on the difference between the purchase price of the asset (usually the original, and often much lower, cost basis) and the proceeds of the sale. This provision is projected to raise significant revenue and is therefore critical to the entire proposal.
Two areas which the President did not address on Wednesday were other changes to gift and estate taxes. Previous recommendations included a sizeable increase to the marginal federal tax rates on estates above the exemption amount and a meaningful lowering of the exemption amount itself. The exemption amount for 2021 is $11.7 million for an individual or $23.4 million for a married couple. The amount reverts to $5.0 million, inflation-adjusted, in 2025 absent any new laws.
There is sure to be considerable debate and discussion around the suggested tax program, and we believe there could be substantial modifications before it is finalized and enacted.
SHARE
Share on Twitter Share on Linkedin
Previous
Next