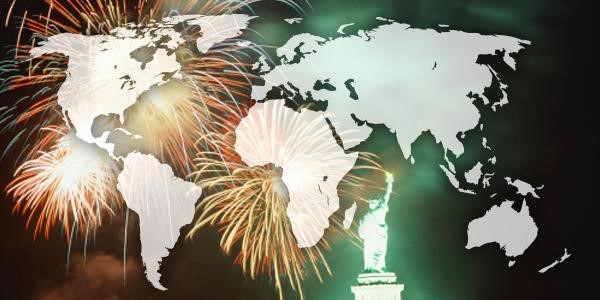 Klingenstein Fields Advisors (KF Advisors) wishes all of our clients and friends a very happy Fourth of July and hopes you enjoy a day of relaxation with friends and family.

Independence Day Around the World
As we mark the 242nd Independence Day in the U.S., we thought it would be informative to take a “tour” around the world to see how other countries celebrate in this increasingly global world. We’ve covered every continent except Antarctica, where every day could be considered Independence Day.

Go Fly a Kite
India gained its independence from British rule on August 15, 1947. Similar to the U.S., Indians celebrate with speeches, parades, and fireworks, but it is also a day people fly kites as a symbol of freedom. All are welcome to go kite flying, and inexpensive kites are for sale in many places.

Allons Enfants
July 14th marks the date in 1789 when French revolutionaries stormed the Bastille, the Paris fortress used as a state prison, marking the start of the French revolution. Today, Bastille Day ceremonies begin with a military parade, and jet fighters flying over the Champs–Élyséesstreaming red, white, and blue jet plumes of smoke. Beyond this grand parade, fire stations hold celebrations for the public all day, and citizens honor the holiday at informal gatherings and street festivals. The day is, of course, capped off with a massive fireworks display in the capital.

One Day is Not Enough
Peru sets aside two days to celebrate its independence from Spain. July 28 represents the day in 1821 José de San Martin declared independence from Spain, while July 29 honors the military and recognizes the establishment of the republic of Peru. Together they make up Las Fiestas Patrias. In the capital city of Lima, you can enjoy the Gran Corso, a lengthy parade with many people dressed in colorful costumes participating, along with enthusiastic drum lines. The next day features an impressive military parade; be prepared for cannons and lots of noise. Festivities tend to last all week with lots of food, fireworks, dancing, and music.

Sometimes it Takes a Week
It may be a small country, but Fiji takes its independence very seriously. It was on October 10, 1874 that the British took control of Fiji and October 10, 1970 when the country gained independence. Fiji Week takes place the week leading up to October 10, with celebrations typically including both religious ceremonies and cultural performances. Through a different theme, chosen each year, the celebrations always honor Fiji’s diversity and commitment to inclusivity.

Soup of the Day
Ending our world tour back in North America, Haiti has a double celebration on New Year’s Day. On January 1, 1804 it gained its independence from the French after General Jean-Jacques Dessalines successfully led his troops against Napoleon’s colonial forces. Upon achieving independence, Haiti became the first nation in the Western Hemisphere to completely abolish slavery. Independence Day in Haiti is a time of flowers, lights, and holiday food. One food in particular, joumou, a pumpkin soup, has special significance. Slaves were not allowed to eat this pumpkin soup because it was a delicacy only to be enjoyed by the French slave masters. When Haiti became independent, all were allowed to eat joumou and it became a special symbol of Haitian freedom.

Reminder: Early Market Closing
For those who have transactions that need attention, we will be here to help on Tuesday, July 3rd. As a reminder, however, the markets close at 1:00 PM EDT, so please contact us as soon as possible for any time-sensitive needs. After taking time on July 4th for picnics and fireworks to celebrate Independence Day, we will be open for business as usual on July 5thand 6th.